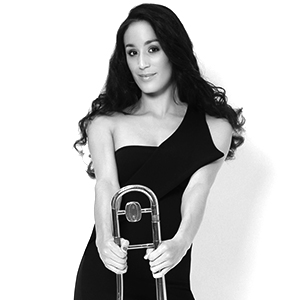 Viva is an immensely versatile London-based trombonist, vocalist and multi-instrumentalist. She began playing professionally on London’s Latin scene while studying for her degree in Development Studies & Politics at the School of Oriental and African Studies. Viva went from strength to strength, and her music career took off.

In the studio Viva has worked with Grammy award-winning producer Charlie Andrew on multiple projects – alternative rock band Money‘s acclaimed album Suicide Songs (Guardian ****) and Swedish wonky pop enthusiasts, Francobollo on their debut single, I Don’t Want to Know. She collaborated with critically acclaimed electronic duo Dengue Dengue Dengue on their 2018 Semillero EP on trombone and effects, as well as with Msafiri Zawose on trombone, effects and vocals on the 2019 EP Penya Safari (On The Corner Records). Her band Penya’s debut LP Superliminal was met with critical acclaim, with a second album funded by PRS Foundation and recorded at Peter Gabriel’s Real World Studios dropping in autumn 2020.

Not stopping there, Viva has been touring and performing with High On Heels around the UK and globally at our party events, weddings and for our corporate event clients, at some of the world’s most prestigious venues that we have taken to the stage at, such as the Mondrian Hotel Doha, The Ivy, Manchester, and Under The Bridge, Chelsea.

As well as Viva’s amazing live music performances, she has collaborated with High On Heels creating and arranging new music and horn lines for our own new horn Section, 360 Horns.