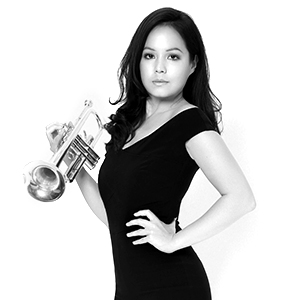 Combine together elegance, flair and expertise and you have the talent that is Emily. An exquisite trumpet player and entertaining live performer.

As a member of High on Heels, and our own horn section 360 Horns, Emily brings a full-force, high-impact energy to parties, weddings and events across the world.

Her career has spanned performances on the magnificent stages of Kensington Palace, The Royal Festival Hall and The Royal Albert Hall, and festivals including Glastonbury, WOMAD, Kendal Calling, Lovebox, Camp Bestival, Shambala and more. Alongside the talented High On Heels crew, she has taken to the stage at well-known London venues such as The Ivy London, German Gym and Magazine London.

From stage to recording studio, Emily also has recording sessions at the prestigious London studios Abbey Road and AIR Studios under her belt.

Emily plays across the UK and further afield internationally, from the big stage of a large brand events or club nights to intimate private parties or at beautiful wedding venues. She has also had residencies overseas for 5 star hotel resorts in the Middle East.  In addition, her career has given her the opportunity to be part of tours and shows in the USA, Italy, Austria, Finland, Germany, France and beyond. Emily is also a composer and arranger and, when not performing, writes for TV and media.

Her professional career has taken her through an exhilarating array of styles including pop, jazz, Balkan beats, Mariachi, musical theatre and more. She has also played alongside the multi-award-winning hip-hop DJ and producer DJ Yoda. However she is never more excited than to take to the stage for a high energy live band set with the High On Heels collective. Performing a live set with DJ, vocals, horns, strings and percussion brings her talent and stage performance to life!
Enquiries: bookings@highonheels.co.uk