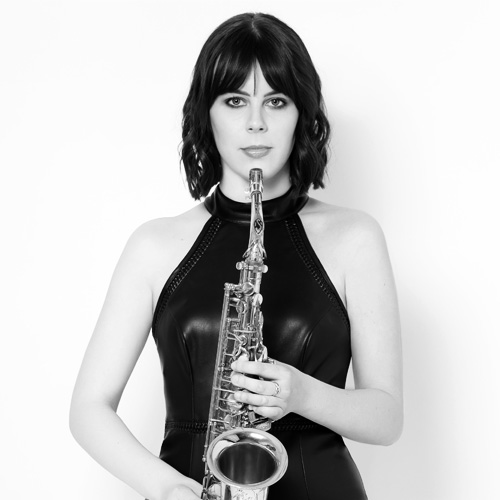 Rachel is an incredible sax player with both experience and calibre. She can complement any occasion from a company brand event or wedding party to an after exclusive club venue or festival.

From London to India, she has performed and entertained in world class venues including The Barbican Concert Hall, Pizza Express Jazz Club and Birmingham Symphony Hall.

Playing alongside High On Heels she fuses her live performance with our music to create an electric party atmosphere. Her versatility and talent means Rachel can jam with the best the of London’s DJ’s and blend her inspiring sounds to produce the perfect ambience for each and every event she is part of. Playing across a multitude of genres including Pop, Acoustic, Ambient pop, Americana, Disco, Funk,  Hip Hop, Karaoke, Motown, to name a few, she has an incredible gift she wants to share.

Having trained at the Guildhall School of Music and Drama Rachel had tuition from some world class musicians including Scott Stroman, Martin Hathaway, Stuart Hall, Malcolm Edmonstone and James Knight, and since graduating Rachel has not stopped touring theatres and venues all around the UK and internationally.

Notably, Rachel spent two years touring with The Best of Wham! And sold out venues such as the O2 Indigo. She also appears on many artist recordings including indie band Bokito and Narobe.

Additionally Rachel has had the privilege to play with great musicians such as Ian Shaw, Liane Carroll, Anthony Strong and Mike Walker as well as bands such as Dat Brass, who last year had their debut at Glastonbury, and have since embarked on successful tours around the UK and Europe.

Not stopping there Rachel also has her own solo pop project which has been picked up by BBC introducing. She is also an accomplished – Arranger, Composer, Lyricist, Songwriter and teacher.