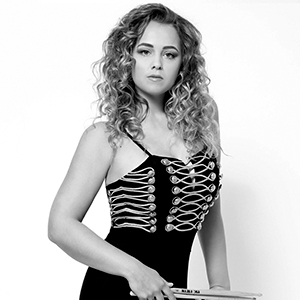 Molly is an award winning percussionist who studied at the prestigious Guildhall School of Music in London. Her distinctive sound and ability to perform live to a multitude of different music and sounds means she is a percussion player always in demand.

Molly has a love for world music and enjoys bringing Latin vibes, West African rhythms and various other exciting influences from all over the world into her percussion playing. She loves to travel and wherever she goes she try’s to absorb as many musical influences as possible an then incorporates what she has learnt into her live performances. This brings an electrifying mix of rhythms and ideas to every show.

Not only does she create and perform with High On Heels she has also worked with bands such as Bring Me The Horizon, Alter Bridge and Clean Bandit. From studio to stage she has performed at prestigious venues including The Royal Albert Hall, Wigmore Hall, Cadogan Hall and The 02 and Wembley Arena. Molly also has many TV and radio appearances to her name along with regular session work in London.

She can jam in unison with the DJ, create percussion lines alongside a crew of musicians from Horns to Strings and be guaranteed to bring cool vibes to every party and event. On top of all this she has also performed for musicals, operas and premiered shows in the UK and toured with theatre companies in America.

Adding to her list of achievements soon after graduation from the Guildhall Molly was asked to be a speaker and performer at a TEDx conference at Warwick Arts Centre. As a solo percussionist Molly has also won many awards for her playing. In 2012 she was a percussion finalist in the televised percussion finals of BBC Young Musician of the year playing a mix of solo pieces for marimba, vibraphone and multi percussion set up. She has also worked with composers to commission new pieces for the marimba and the vibraphone.

Her journey with High On Heels has taken her international. Performing live around the world for exclusive events and parties at Bushido Bahrain, W Hotel Qatar, The Four Seasons and and MNKY HSE London, as well as venues in Zurich, Copenhagen, Warsaw, Madrid, Luxembourg, Brussels and Monaco.