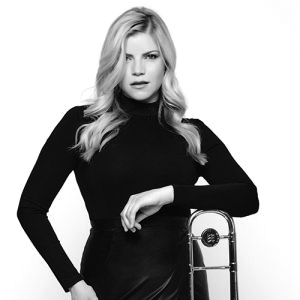 From playing in the local brass band in Cornwall as a child to international Trombone player. Emma Bassett is a phenomenal trombone player that has all the credentials of a first class musician.

As well as her classical and academic achievements Emma has developed an excellent non-classical profile.  She has toured the Balkans with the Hackney Colliery Band, played for the Bollywood film Neethaane En Ponvasantham in Southern India, performed for BBC radio and performed at Glastonbury with Adele, not to mention performing with the High On Heels collective at the legendary London nightlife venue Tramp.

Emma enjoys playing a wide and varied range of genres at all kinds of functions and events. From classical orchestral pieces to party and club classics with the DJ. Her creative musical expertise blended with her live stage performances brings an electric performance.